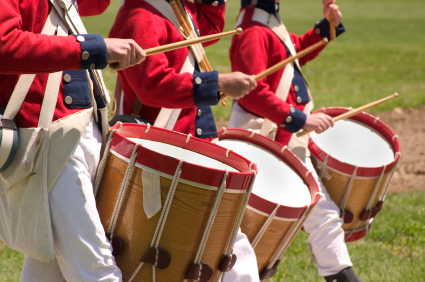 Following a period of increasing taxes, restrictions, and levies against the American Colonies by British Parliament during the 1760’s, the colonists staged the Boston Tea Party (December 16, 1773) in rebellion, dumping crates of tea into Boston Harbor, refusing to pay the tax imposed on tea any longer. In September of 1774, the first Continental Congress assembled in Philadelphia to draft a Declaration of Rights and Grievances against the British. Meanwhile, the British troops were quartered in Massachusetts homes to enforce the acts and taxes; the Sons of Liberty, first organized in 1765, continued to advance the cause of independence from Britain. Tensions mounted, leading to the Battle of Lexington and Concord, the ?shot heard round the world,? on April 19, 1775, and the American Revolution began. The Declaration of Independence followed on July 4, 1776. It wasn?t until 1783 that the Treaty of Paris was signed, ending the Revolutionary War.

Below you will find links to some of the famous and not-so-famous spies involved in the Revolutionary War. These are the stories of the traitors who almost kept America from its independence.

Although these traitors to American independence did their best to aid the British, the Colonists prevailed and won liberty for the country after eight long years.