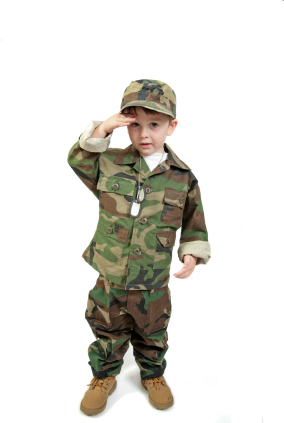 28 Feb The Plight of Child Soldiers

Though children do not instigate wars, they are the most vulnerable to its effects and since early ancient times they have been utilized in war. In ancient Greece, boys started fierce military training at the age of 7. In modern times, child soldiers may be as young as 7 or 8 and the majority of children are younger than 15. Prime candidates for becoming child soldiers are children who are orphans, refugees, and those who grow up in civil war zones. Many child soldiers are forcibly recruited: kidnapped from their homes, schools, and streets. Often these children are tortured and beaten, told they must either join or be killed. Some children feel they have no other option and volunteer after being lured with false promises. Children with families may be encouraged to join up by their parents believing it to the best option to handle lack of educational and work opportunities and escape poverty and hunger. Children also join up for revenge after witnessing rapes, massacres, tortures, and bombings of family. Large numbers of child soldiers can be found in Africa, including Somalia, Chad, and the Sudan. Child soldiers are also fighting in conflicts in many other parts of the world including: Myanmar, Pakistan, Sri Lanka, Afghanistan and Iraq.

The young age of child stars is influenced in part by the fact that modern guns are lightweight, requiring no physical prowess in order to wield. Children are also looked at as easier to manipulate then adults and available in greater numbers. To force children to go along with participating in horrendous crimes some are drugged. Once children are integrated into the army, they must keep up appearances or face being killed. Child soldiers have been forced to kill their parents and ordered to shoot unarmed civilians without flinching. Slowly, these children are brainwashed, through training, humiliation, physical abuse, and psychological torture to become ruthless killing machines. Stripped of regular childhoods, their impressionable young minds are easily manipulated to believe in radical ideologies and to go along with the militia. Children are told that if they try to escape they will be killed. Most of the time, these children do not fully understand what they have done. Once the conflict ends and they escape or are released, they struggle to reintegrate into society; tortured by memories of what they have witnessed and taken part in. As well as dealing with anger and hatred from the local community aware of what they have done.

The stories of child soldiers are tragic and horrifying. Though many children survive, the mental and physical toll can remain for the rest of their lives: causing isolation, unwanted pregnancies, sexually transmitted diseases, malnutrition and a loss of identity. Many have survived to tell their own stories in videos, songs, interviews, and pictures.